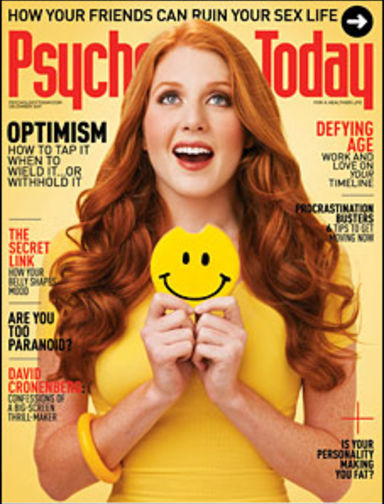 The Uses and Abuses of Optimism and Pessimism

Field Guide To The Overachiever

Inside the do-or-die mind of an overachiever

Notable Characteristics: Felt like a loser when Stanford was his best option. Spends 15 hours developing a recruitment presentation for the kids' PTA. Regularly sends 27 work-related emails between 8 p.m. and midnight.

Songs & Calls: "Just one more revision." "Try harder!" "I heart all-nighters!" "I bring home the bacon, fry it up in a pan, make homemade 'this little piggy' hand puppets for my kindergartner's classmates, run five miles daily, and, in my free time, raise and sell free-range chickens."

Whether it's CEO status or a seven-minute mile, we're all driven to accomplish goals. And whether we have the skills to be the next Jimi Hendrix or the best damn bass player at Mad Dog's Open Mic Night, there is a healthy way to approach any objective: namely, by striving for self-improvement or for a boost in our environment or relationships.

But the normal drive to accomplish tasks has a dark counterpart. People driven to overachieve are motivated by an unhealthy compulsion to show they are worthy. "Overachievers have an underlying fear of failure or a self-worth contingent upon competence," says University of Rochester psychologist Andrew Elliot. "Rather than setting and striving for goals based on a pure desire to achieve, their underlying motivation impels them out into the world to avoid failure."

Some of us skip through life with our eyes on the prize while others skulk along dodging loser status. As we set out to accomplish things, that fundamental distinction between approach and avoidance motivation—between a positive and negative orientation—leads the overachiever to adopt certain types of goals that directly affect performance.

"The goal and motivation together result in overachievement," says Elliot. There are three basic ways to go after an objective. Approach-mastery goals are pure, focused on self-improvement for its own sake and predictive of learning and deep processing: "I'll memorize spelling bee words because it'll be fun to know what guidon means!"

Overachievers are likely to adopt competitive performance-approach or fearful performance-avoidance goals because of an underlying motivation to "be better than others to avoid rejection," Elliot says. That negative underpinning can turn an otherwise useful performance-approach goal into one that causes stress. But avoidance goals are even more problematic, he adds, because they "create worry and distract people from the task due to self-concerns." Those self-concerns, in turn, can cause low self-esteem, feelings of incompetence, and life dissatisfaction.

Perfectionism is a key feature of compulsive overstriving and being driven to achieve, says psychologist Gordon Flett of York University. Painfully high self-standards may compel overachievers to obsessively pursue success—picture the college student with the 3.9 GPA who can't stop self-flagellating over that one B+.

The irony: Though they strive for greatness, most perfectionists are destined for disappointment. "The data on perfectionism and actual performance show little payoff in terms of objective achievement," Flett reports. And when perfectionists do perform exceptionally, he adds, "many evaluate themselves quite harshly and don't feel especially good about their accomplishments."

But high self-standards in one domain do not an overachiever make, and your decades-long quest to play "Little Wing" like Hendrix is not necessarily neurotic. "It's maladaptive when someone is striving to be a perfect person, but it's natural to want to be perfect in the one or two areas that matter most to you," Flett says. So fly on, Little Wing.

Some overachievement may be a generational hazard. Téa Obreht, Mark Zuckerberg, Aaron Schock—they are just a few young superstars, and it's hard not to wonder if all Millennials are hell-bent on proving themselves by 30. Jean Twenge, a San Diego State University psychologist and author of Generation Me, says they certainly believe they can: "This generation has heard about competition and individual success since they were babies, and we've found increases in self-belief across traits that relate to achievement, success, leadership ability, and self-confidence."

As a result, many young people today think they're superior to their peers and appear ambitious—playing up their successes as proof of their overachievement. But Twenge spots a growing disconnect between self-views and reality. For example, when adjusted for inflation, the average income of young men in their 20s is lower than it was in the 1970s, despite the play afforded in the press to modern Millennial millionaires.

Our culture's preoccupation with youth and success perpetuates the idea that prodigies abound. But history is filled with wunderkinds: Jane Austen wrote Sense and Sensibility at 19, for example, and Stevie Wonder recorded "Fingertips" at 12.

As for true prodigies, those who start early and have exceptional ideas and success, "their personalities are not systematically different from those of other, equally ambitious people," says Tomas Chamorro-Premuzic, a psychologist at Goldsmiths University of London. Thank brilliance, diligence, and perhaps a touch of luck.

Some roles tend to breed overachievers. Mothers today truly are busier than past generations, says psychologist Diane Halpern of Claremont McKenna College: "On average, women still do more child and home care than men, and with increasing work hours, women are working more." Layer on vegetable gardener, coach, triathlete, and literacy volunteer, and you have a picture of the modern-day Supermom.

Unfortunately, this overachiever is often motivated by a fear of judgment from other moms and from society at large; an approval-seeking type may strive to look like the perfect wife, mother, employee, and community member, not out of internal motivation but out of a competitive need to look as "together" as the next mom, Elliot says.

Supermoms may set themselves up for exhaustion and health problems, Flett warns. Working moms who felt they could "have it all" showed more depressive symptoms than those who expected they would have to forgo some aspects of their career or parenting to achieve balance, according to new research from the University of Washington.

For a happier life

The Secret to a Happy Life

Field Guide To The Overachiever