Not Enough Willpower? Use Your "Extended Will!"

"Teamwork" is a terrific technique for boosting your willpower. 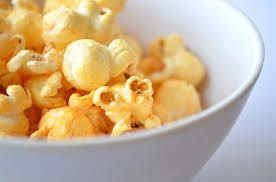 Would you eat this popcorn if it were stale?
Source: Pixabay

During a recent talk on how to change a habit, a woman asked, "Where does lack of willpower figure into this?  I mean, I want to change my eating and exercise habits, but I'm just too lazy."

I'll tell you at the end of the blog how I answered her question.  For now, think of how many people, like the questioner above, believe they must exert super-human effort to get themselves to do what they would really like to do.  But do you have to be a super-hero with awesome willpower to change a habit?  Or is there another way?

Willpower is "using only the thought of your motivators to guide your behavior."  If your motivator is "lose weight to avoid diabetes," strong willpower would mean you could use this thought to control your eating behavior even in a restaurant that scorns the idea of portion control.  You could sit in front of a bowl of pasta large enough to feed a small third-world country, decide to eat only half of it, and then do it.  Now that's willpower!

Yeah, right. How many people can really do that?  Study after study has demonstrated that most people just eat what's put before them.  Instead of eating mindfully, we sink into a trance state, automatically shoveling food into our open mouths whether it tastes good or not.  In one study, people even ate extra-large portions of stale popcorn because...well, it was there.

So, if you are like most people, you probably need to back up your willpower with "changepower."  "Changepower" is a word I've coined to describe all those outside resources that strengthen willpower--things like support groups, healthy environments, helpful friends, and wise plans and strategies.  I hadn't realized that psychologists were now using a different term for virtually the same thing--"the extended will."

"Extending your will" means figuring out how to arrange your world to support your desired change.  You consciously choose people, places, and things to keep you on your chosen path.  You might "distribute" your willpower to a support group or to a good friend and give them permission to help you change.  These decisions create a "scaffolding" that holds you up when you feel weak.

To "extend your will" in the above example, you might:

Here are other examples of using your extended will to make changes:

In fact, many people you admire for their steely willpower may just be experts at using the extended will.  They've arranged their world to channel their actions in their desired direction.

If you enjoyed this blog, you may be interested in my book, Changepower! 37 Secrets to Habit Change Success (Routledge, 2009). For more tidbits on willpower, habit change, and healthy living, follow me on Facebook and/or Twitter.

"Stale popcorn." For this and many other examples, see Brian Wansink, Mindless Eating (Bantam-Dell, 2007).

Meg Selig is the author of Changepower! 37 Secrets to Habit Change Success.

9 Ways to Find Your Purpose As You Age

Aging has its challenges, but meaningful goals lead to health and happiness.

To keep your life on a positive track, activate your negative thinking skills.

How Desire Fools Us

Get Out of the Groove