A Little Trick to Help You Feel Less Sad

You may be able to improve your mood by anthropomorphizing your emotions. 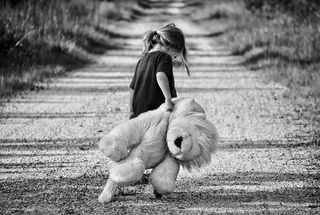 Sometimes you need a little cheering up.
Source: Greyerbaby/Pixabay, used with permission

A psychotherapist once taught me a little trick that helped me feel less angry at my partner and less sad about the failings of our relationship.

She said, “Look at him and imagine him as a very little boy; that way, you detach yourself somewhat from the adult, and you may be able to feel more compassion and forgiveness.”

It actually helped. I couldn’t be as mad at or disappointed by a child as I could be with a grown man. So, at least on some occasions, we were both spared the heartache of an uncomfortable silence or a not-so-silent argument. And I sometimes still use versions of that trick whenever I feel frustrated or angry in other relationships or personal exchanges.

But what if you could mentally change the form of the emotion itself? According to collaborating scientists at Hong Kong Polytechnic University, the University of Texas, and Hong Kong Baptist University, maybe you can.

Focusing specifically on sadness, the researchers asked two groups of study participants to write about a time in their lives when they felt very sad. They then asked one group to imagine sadness as a person, and write down a description of the person they imagined would be sadness. Not surprisingly, the participants described sadness in such ways as an older person with gray hair and sunken eyes or a young girl holding her head down as she slowly walked along.

The researchers asked the other group of participants to write down a description of sadness with respect to its impact on their moods. When asked to rate their levels of sadness after completing their descriptions, the participants who wrote about the emotion itself and how it affects them reported higher levels of sadness than the group that anthropomorphized sadness into a specific type of person with familiar human traits. The researchers suggest that by giving life to the emotion, participants can view sadness as something (or someone) separate and somewhat distant from themselves, helping them feel more detached from their negative feelings.

While it's okay to feel sad, many people behave in spontaneous and sometimes self-destructive ways to distract or “save” themselves when they are consumed by negative emotions. So the study authors wanted to know whether or not the group that reported feeling less sad would make smarter shopping decisions.

They tested this by asking participants in both groups to first choose between a salad or a cheesecake dessert to go with the main dish they were having for lunch. The researchers also asked participants to choose between a computer loaded with features for productivity or a computer loaded with features for entertainment. Those study participants who had anthropomorphized their emotions were more likely to choose the salad and the productive computer than those who had simply written about their feelings.

According to a report in ScienceDaily, the researchers were actually inspired to test their theory by the popular children’s film, “Inside Out (Pixar, 2015)," wherein a child’s emotions, both positive and negative, appear to come to life and take on human qualities during a tough time of transition. The researchers also did a similar experiment testing the effects of anthropomorphizing happiness and found that that the positive emotion was also diminished when study participants gave it a human form. For obvious reasons, then, they say this technique is best for diluting negative emotions.

Fangyuan Chen, Rocky Peng Chen, Li Yang. When Sadness Comes Alive, Will It Be Less Painful? The Effects of Anthropomorphic Thinking on Sadness Regulation and Consumption. Journal of Consumer Psychology, 2019

Society for Consumer Psychology. "A new strategy to alleviate sadness: Bring the emotion to life: Researchers show how characters from the movie 'Inside Out' hold the key to regulating emotions and behavior." ScienceDaily. ScienceDaily, 3 October 2019

Researchers say milk is healthful if you’re careful about which type you choose.

Excess abdominal fat may relate to changes in fluid intelligence as you age.

Weight Loss: Timing May Be Everything

A new study suggests meal-timing is a promising tool for weight control.