When I published The Athlete’s Way in 2007, the idea that aerobic exercise could improve memory by triggering the production of BDNF—which is like Miracle-Gro for the brain and stimulates the birth of new neurons (neurogenesis) in the hippocampus—was a radically new concept. 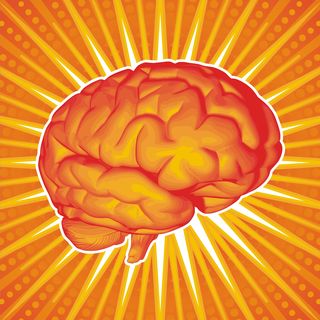 Over the past decade, countless human and animal studies have identified a link between aerobic exercise, hippocampal neurogenesis, and improved memory. Yesterday, I reported on yet another study (McGreevy et al., 2019), which found that putting mice on a six-week cardio regimen stimulated neurogenesis in specific regions of the hippocampus and improved scores on memory tests.

In addition to weekly exercise bulking up the hippocampus over time, there is a growing body of evidence that one bout of exercise boosts memory immediately after a workout. Last year, a study (Suwabe et al., 2018) by researchers in Japan reported that a single 10-minute bout of mild exercise such as yoga or tai chi enhanced memory by stimulating the dentate gyrus region of the human hippocampus.

Increasingly, the holy grail for neuroscientists studying the brain benefits of exercise is to dial in on the optimal “dose” (intensity × duration) of cardiovascular exercise or easy/light movement that is required to elicit various cognitive outcomes in the short- and long-term.

This week, a new study from the University of Maryland, “Semantic Memory Activation After Acute Exercise in Healthy Older Adults,” was published online ahead of print in the Journal of the International Neuropsychological Society. This research advances our understanding of the dose-response needed to activate brain circuits associated with semantic memory. Generally speaking, this refers to memories that relate to language, words, and names.

"While it has been shown that regular exercise can increase the volume of the hippocampus, our study provides new information that acute exercise has the ability to impact this important brain region," lead author, Carson Smith, who is an associate professor of kinesiology at the University of Maryland School of Public Health in Baltimore, said in a statement.

For this study, Smith and his UMB colleagues used fMRI neuroimaging to monitor the brain activity of study participants (ages, 55-85) and their ability to perform a memory task that involved identifying famous names on two separate days.

On the first day, a semantic "name recognition" memory test was conducted after a 30-minute session of moderate (70% of VO2 max effort) intensity cycling on a stationary bike. On the second day, participants came to the lab and sat in a waiting room prior to performing the “Famous and Non-Famous Name Discrimination Task” during fMRI brain scanning. 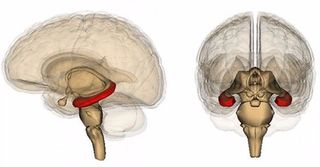 Hippocampus on both sides of the brain in red.
Source: Life Sciences Database/Wikimedia Commons

The researchers found that after 30 minutes of moderate-intensity cycling, participants correctly remembered more names. The fMRI also illuminated an uptick of activity in the hippocampus on both sides of the brain and increased activation of the middle frontal gyrus, inferior temporal gyrus, middle temporal gyrus, and fusiform gyrus after one 30-minute aerobic session.

"Just like a muscle adapts to repeated use, single sessions of exercise may flex cognitive neural networks in ways that promote adaptations over time and lend to increased network integrity and function and allow more efficient access to memories," Smith said. In the paper’s conclusion, the authors write: “Coupled with our prior exercise training effects on semantic memory-related activation, these data suggest the acute increase in neural activation after exercise may provide a stimulus for adaptation over repeated exercise sessions.”

In addition to the long-term brain benefits of sticking with a regular exercise regimen throughout the week and across a lifespan, the latest research suggests that scheduling a 30-minute cardio workout at moderate intensity immediately before taking a written test or writing something that requires semantic memory might improve your performance.

As a writer, I know that my ability to access vocabulary words stored in my memory banks (from when I crammed for the SAT decades ago) as well as my overall ability to express ideas and thoughts via the written word, is always better after a 30+ minute jog.

That being said, if your schedule is tight or other daily logistics make 30 minutes of sustained moderate-intensity exercise impossible, remember that researchers in Japan found that 10 minutes of very light exercise (a slow walk or gentle yoga/tai chi) stimulates the dentate gyrus region of the hippocampus and boosts cognitive function in the short-term.

You may be asking: How can I gauge my percentage of exercise intensity if I don’t know my VO2 max or have a heart rate monitor? Using a “talk test” is one of the easiest ways to gauge the intensity of your workout. To keep it gadget-free and straightforward, you can also visualize various exercise intensities as corresponding to three color-coded zones marked by yellow = light intensity, orange = moderate intensity, and red = vigorous intensity. 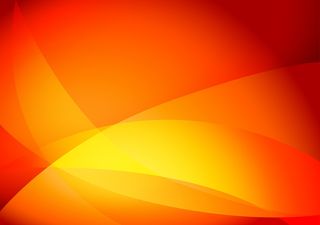 In the “easy/light” yellow zone you could carry on a lengthy in-depth conversation while strolling at a slow pace with a friend or doing some tai chi movements. When you're in the “moderate” orange zone during a brisk walk or slow jog, sentences automatically become shorter to avoid running "out of breath" because you're huffing-and-puffing a little bit. During intervals or HIIT training, when you’re in the “red zone” (upwards of 80% VO2 max effort) you are generally gasping for breath and can only speak two- or three-word sentences or give “yes and no” answers.

All of these exercise intensities are accompanied by an inner dialogue that can range from, "This is a breeze. I could walk and talk at this pace all day," to, "OMG! This is killing me! I can only sustain this level of exertion for a few more seconds."

When you're doing a high-intensity interval training (HIIT) workout with a series of intense bursts of exertion followed by an easy break—during the recovery phase between intervals, when your heart rate is hovering around 30% max—you might color code the intensity as "mellow yellow." On the flip side, during the bursts of 80% VO2 max (or higher) exertion during HIIT, you'd see fire-engine red, and the voices in your head are often dominated by an expletive-filled inner dialogue screaming, "Holy #$@&*! This workout is tough!"

Within these three "color-blocked" zones of aerobic intensity, there are innumerable shades of yellow, orange, and red. For example, if you're striving to achieve the new recommended guidelines (Piercy et al., 2018) of 150 minutes per week of moderate-to-vigorous physical activity (MVPA), you would spend about 22 minutes a day in a "mid-orange zone." But this orange color is on a spectrum that would fluctuate by taking on a more reddish hue (like the color in the upper-right corner of the abstract Pixabay image above) during brief periods of "vigorous" exertion while running up a hill or climbing some stairs.

The key to any well-structured "neuroprotective" workout regimen is to constantly mix-it-up by spending a little time in various zones of intensity every week and striving for about 30 minutes of MVPA aerobic exercise most days of the week, if possible.

DISCLAIMER: Please use common sense and consult with your primary care physician before beginning any new physical activity or kickstarting a vigorous exercise regimen—especially if you have not done any high-intensity physical activity recently.

yes, mind and body cannot be looked at separately

and the importance of a well functioning body in terms of emotional and psychological well being is still very much not understood.

Keep up what you're doing

Christopher Bergland, I read your book and I'm a big fan. Please keep spreading the word about how amazing exercise is for anyone and everyone.

Good morning, Eric Choi — A million thanks for the positive feedback and your words of encouragement. I will keep spreading the word! :-) Thanks again, Chris 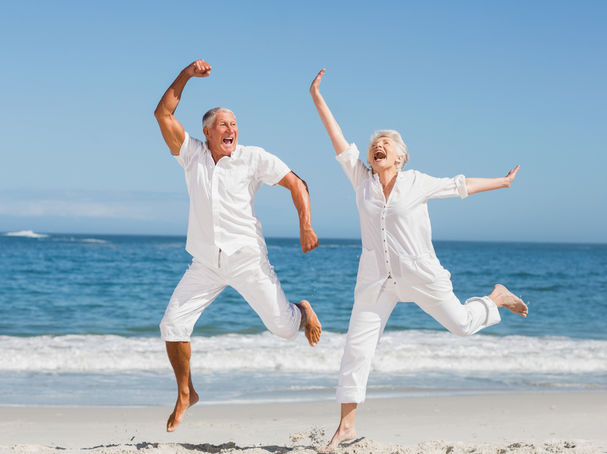 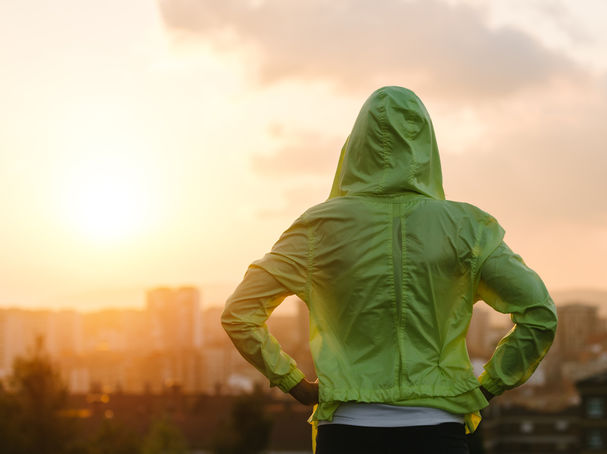 Morning Exercise May Improve Decision-Making During the Day

HIIT Workouts May Be Best Way to Optimize Body Composition 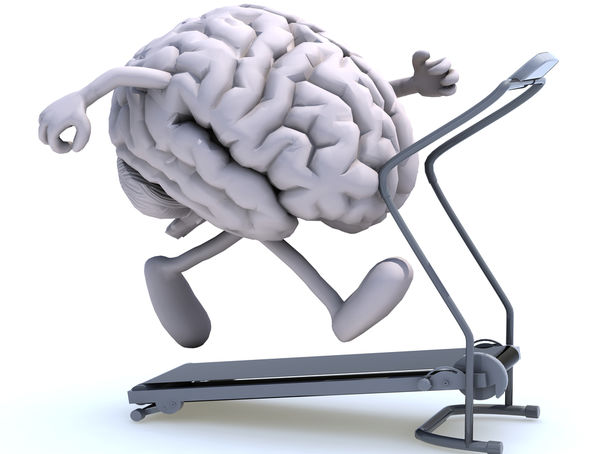 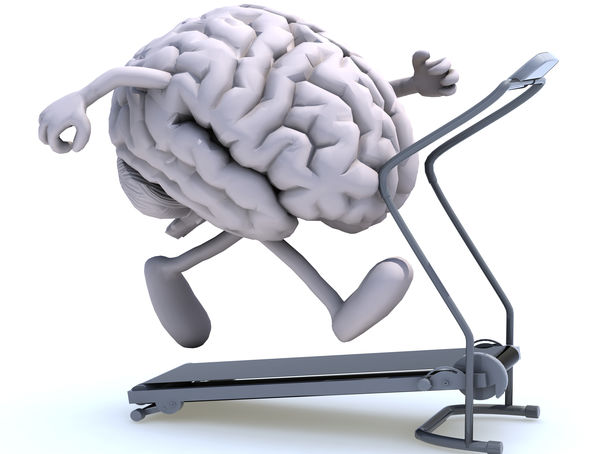 More Proof That Aerobic Exercise Can Make Your Brain Bigger